I’ve read a lot of time travel novels and short stories in my time. I’ve even watched plenty of time travel movies and TV shows. I’m sure you have as well–this subject has been fertile ground for creative types going back to H.G. Wells. So what, you might ask, attracted me about All Our Wrong Todays? Nothing.  Well, very little.  It didn’t look THAT enthralling to me, until my wife pointed out a glowing Entertainment Weekly review and suggested that we should read it.  Which we have, and which was an excellent call on her part.  Good work, K. 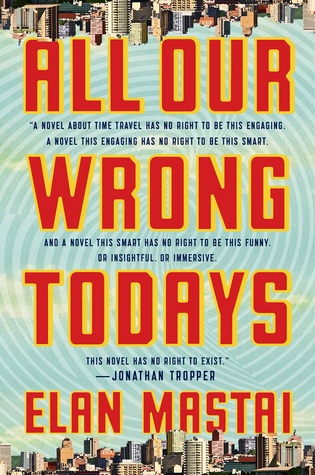 Elan Mastai is a first-time novelist (again with the amazing first-time novels giving me a complex about my own writing).  His day job is apparently writing movies, which explains the instantly cinematic quality of this novel.  It wouldn’t be that difficult to make it into a film, and I fully expect that to happen before much longer.

Immediately after typing that sentence, I had to go and see whether someone’s actively a making a movie version of All Our Wrong Todays.  Turns out the answer is yes!  So that’s something that makes reading this book now, today, even more urgent.  You don’t want to watch the movie version before you read the story, do you?

All Our Wrong Todays is a book about time travel.  There’s no getting around that.  If books about time travel don’t interest you, it’s a harder sell to get you to read this.  I accept that.  But it’s also a book about love, about possibilities, about the worst and best within all of us.  It’s a book full of unforgettable characters doing the best they can to preserve what they care about, and sometimes making terrible mistakes in the process.

It’s difficult for me to summarize much of the plot without spoiling anything.  And since I absolutely hate spoilers, I’ll try my best to do just that.  Let’s see: Tom Barren’s world is a utopian ideal.  It’s 2016, but not OUR 2016.  In Tom’s universe, a brilliant scientist created an invention that produced limitless energy back in the 1960s.  The course of history was changed forever by this invention, and led to some major differences in culture, technology, architecture, and pretty much everything else.  But Tom is unhappy, and never really succeeds at anything in his life.  Having a brilliant father makes all the difference sometimes (for better or worse), and Tom has the chance to be the first one to go back in time to where it all began, to watch the fateful experiment that changed the world.  Which doesn’t go as planned.  And then–well, then, things happen.

This book is sometimes dizzying, sometimes melancholy, sometimes hilarious, occasionally terrifying, and always fascinating.  I read it far faster than I should have, since I was racing through it at breakneck speed, wanting to know what happened next (and what was going to happen at the END).  It was so much fun!  My wife is getting close to the end, and it’s taking a whole lot of self-control on my part to stop me from discussing some choice plot points with her.  I enjoyed this story so much that I ALMOST want to spoil some things just to get you, the reader of this post, more interested in reading the book.  Which is almost unthinkably against my character.  Ponder that for a moment.

All Our Wrong Todays doesn’t stop with one trip through time, and it doesn’t rest on its laurels in terms of plot points, either.  I found myself breathlessly awaiting the next thing to happen, the next twist to come down the line, the next possibility to entertain in the back of my brain.  This novel scratched all my itches as a reader, and I desperately wish I hadn’t read it, so I could pick it up again for the first time.  It’s that good.

Mastai’s writing style is approachable, but never dumbed-down.  I thought his imagery was excellent, and his character development was impeccable.  I’m thrilled to have found an author that moves me so much, and will be keeping an eye out for anything he writes in the future, period.  I know I won’t be the only one, either–this book has four stars on Amazon, with 81 reviews.  On Goodreads, it has a 3.99 rating, from 1513 people.  That should tell you something about its quality: people like it, for some very good reasons.  This is one to put on your list.  Now.

All Our Wrong Todays is a story that’s going to stick with me, long after I’ve finished it.  I think it has the potential to make you think, too–you should give it a shot.  I’m pretty confident in saying this.  Buy this book here.  Then thank me.  Or don’t, but either way, you should read this.